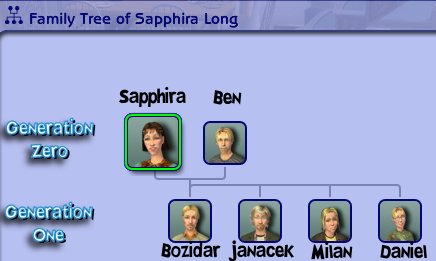 The Family tree for my Legacy family.  And where they are up to until when they move to SimVannia Waters. Although their move is more that the land beneath changes, rather than they pick up their sticks and move. Sapphira is very attached to her piece of land.

Ben Long is a KNOWLEDGE Sim (Adult). He met Sapphira when she was a medical intern, and he was a GP. When he recently became Chief of Staff at St Kiri's he achieved his lifetime ambition. A kind and loving husband, he has a secret hobby of break dancing, and all his boys have inherited his innate sense of rhythm.


Sapphira Long nee Legacy is a FAMILY Sim (Adult), who wants nothing more than to have at least 3 of her boys go to Uni. She came to this town as a refugee, and became a scientist because then she could help people without having to talk to them. She has a good heart, but is addicted to the energiser machine. Probably the only Sim to be anorexic.

Bozidar Long is a KNOWLEDGE Sim (YoungAdult). He hopes one day to become a Mad Scientist. He's a quiet, kind guy who idolises his dad and is super shy around... well everyone. BHIS really hopes that one day he'll get over that and find a love. He's the younger of the twins, and so he's often in the shadow of his more out-going twin Jan. However the twin-connection is strong.

Janacek Long is a ROMANCE Sim (YoungAdult). If he becomes a celebrity chef sometime in his life, then he'll be happy. The more out-going of the twins, he's unlikely to behave as a lot of woohoo sims do because of the strong role-model he has in his father and mother, and how much he adores them.

Milan Long is a POPULARITY Sim (Teen). He thinks he's an athlete so he longs to be a Hall-of-Famer. (BHIS thinks he's got no chance, considering how much time he spends not working out). He has a lot of friends but does not even think about romance, which worries his mum.

Daniel Long is a WEALTH Sim (Teen). The true athlete of the family, he runs everywhere, and is cute as a button. However his wish to be a criminal mastermind is likely to put him at odds with the rest of his law-abiding family. He got the glasses as a child when it was discovered that his low grades were due to not being able to see the blackboard.
Posted by Kiri at 7:42 PM