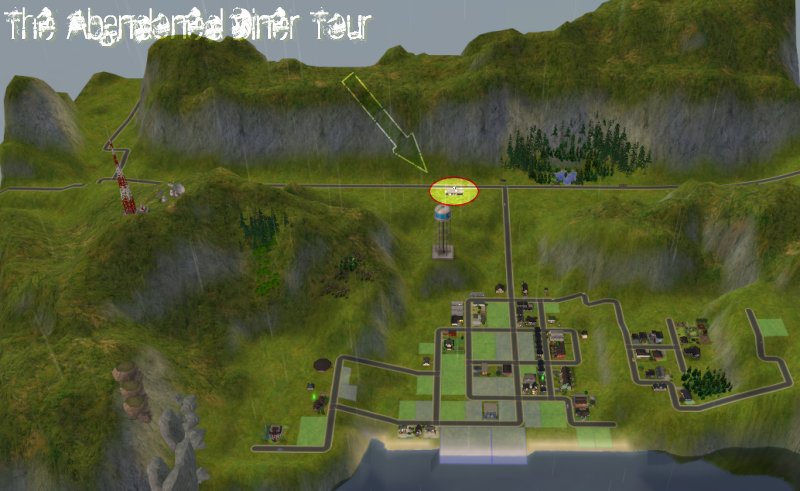 You've picked a wet day to do a tour of one of our local buildings. But you did say you were interested in buying a fixer-upper and there isn't a building that needs fixing-up more than this one.


Note: Frankie Mashuga is the Real Estate Agent in SimVannia Waters, so this is all done from his point of view. The made over lot of EA's Red's Diner is a part of the N99 makeover project. The plan was to make a community lot into a residential lot. I like this one well enough that it's going to go into my play-hood. 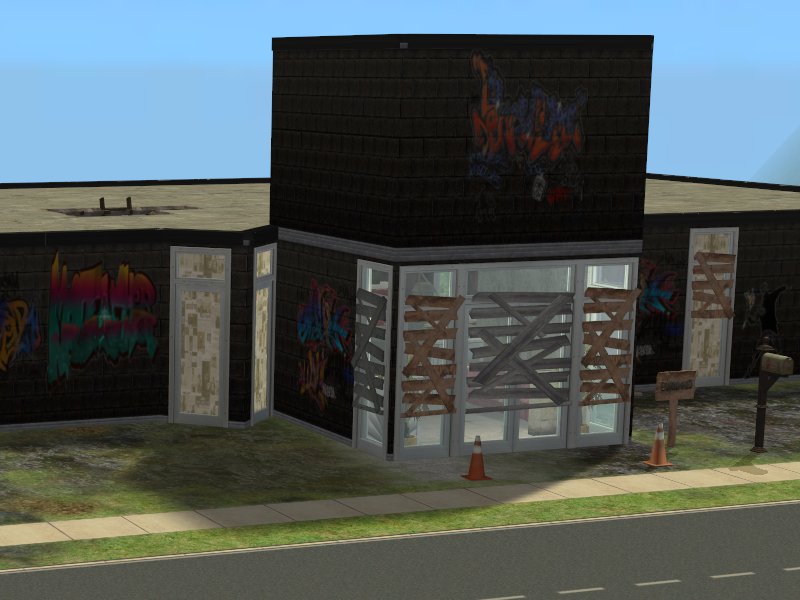 Ignore the condemned sign - the diner's had a squatter in it, and they put that up to discourage folks. We sealed the building and they're gone - well they better be. As you can see the windows have actually on the whole remained intact.

Do you have your umbrella? I suppose we can do a quick round outside. 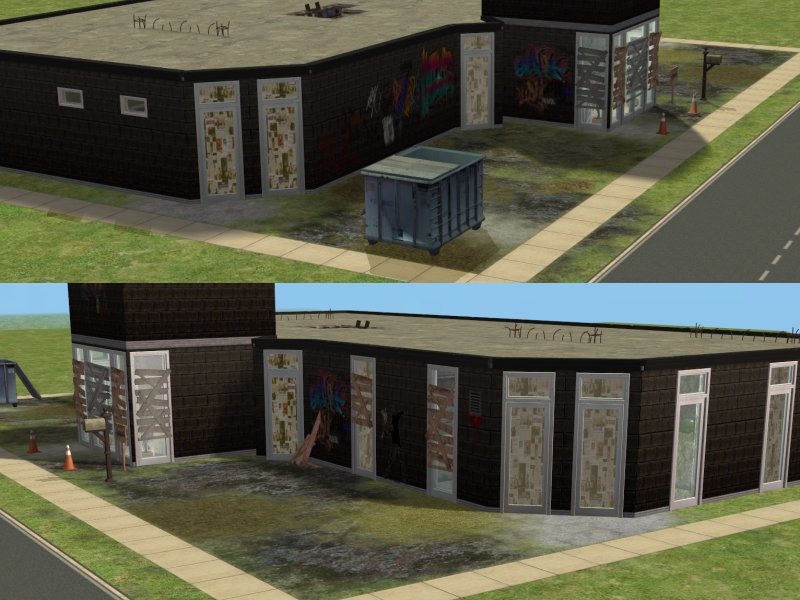 Oh?! You've changed your mind about going round the back. Well yes, the smell is pretty rich around there. I think locals have used it for a dumping ground to be honest. Lets go inside. 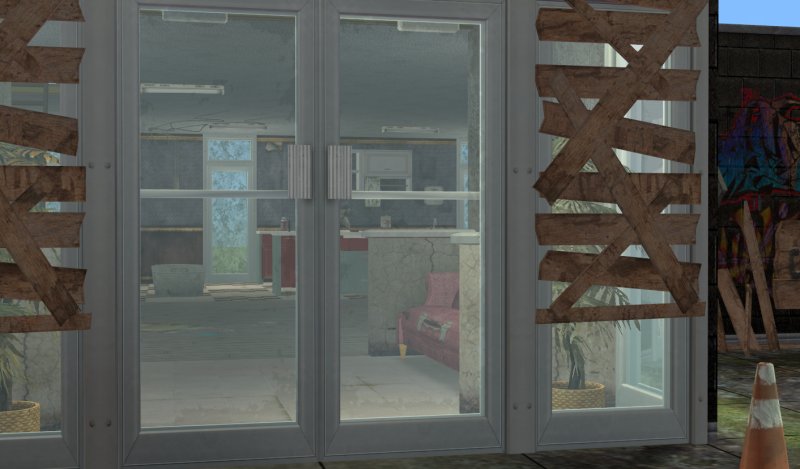 Let me just remove the boards from the door. Wonderful what a claw hammer can do! The sofas in the waiting area are a bit worse for wear, but given the hole in the ceiling and elsewhere they're holding up remarkably well. If you want to get rid of them, we can take them to the dump... for a small fee. Large Garbage Collection happens 4 times a year, but can be booked for other times. 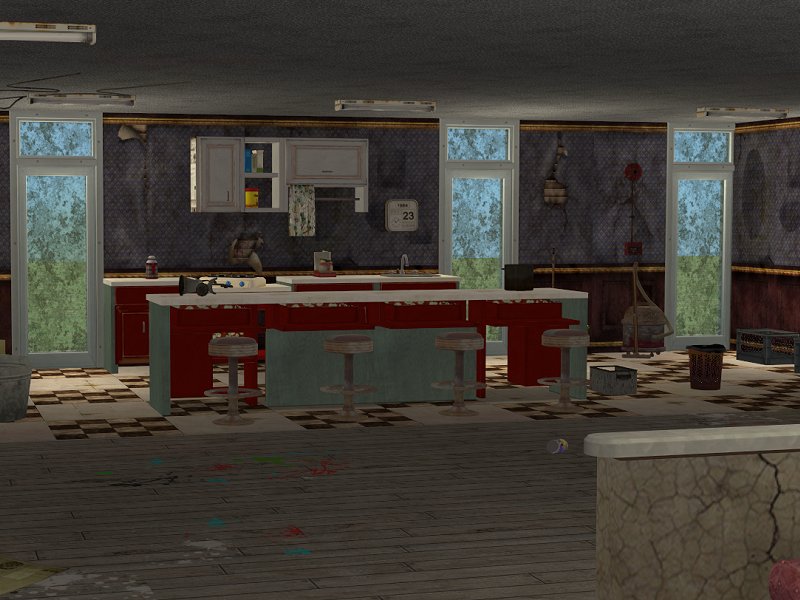 The first thing we can see is the kitchen - most of it's been ripped out when it was abandoned by the owner, but there are few things left here. And the squatter brought in a gas burner so surprisingly its still a working kitchen. The water's been turned off of course. 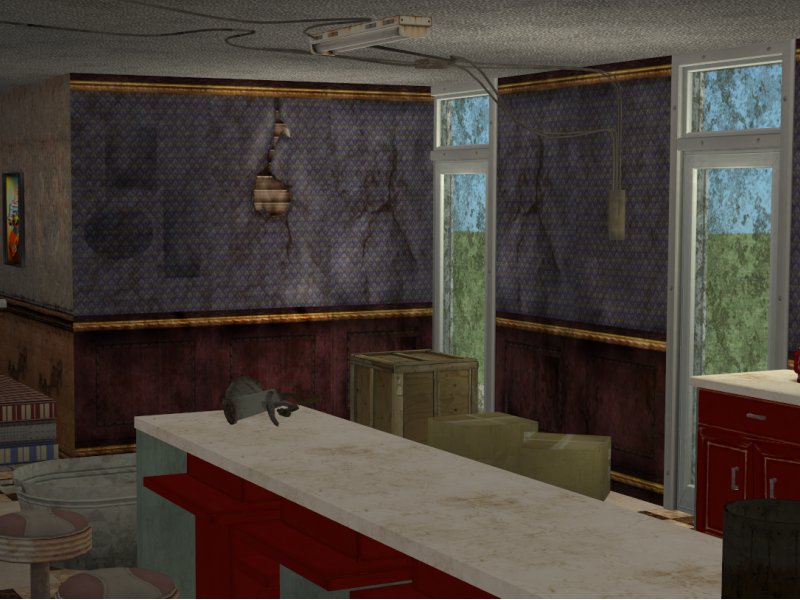 All the kitchen needs is a bit of wash down and it'll be good as new! I wouldn't look in those boxes if I were you - this place has been abandoned for years, and if that's food... it's probably mutated into some sort of deadly virus. Best just to leave it. 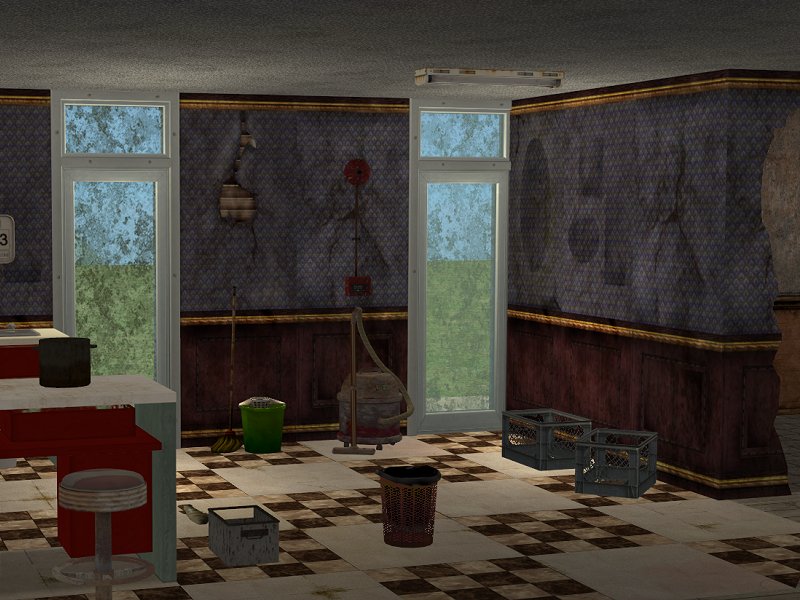 I doubt the vacuum cleaner still works, and I'd throw out the mop if I were you as well. It IS a fixer-upper. Yes. I am sure that it's not condemned. That smell is the fish on the floor. Where are the pictures? They were taken at some point. Probably used for firewood by the squatter. 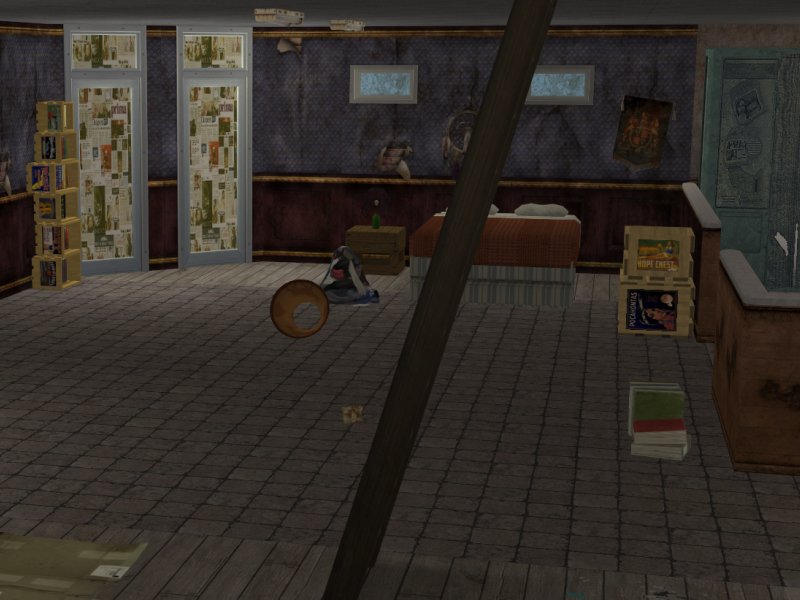 OK. Up this end where the squatter used to sleep, is where the fine dining area was. They were hoping to install a dance floor and space for a band before they left. But times are hard, sir and madam, times are hard and it never eventuated. 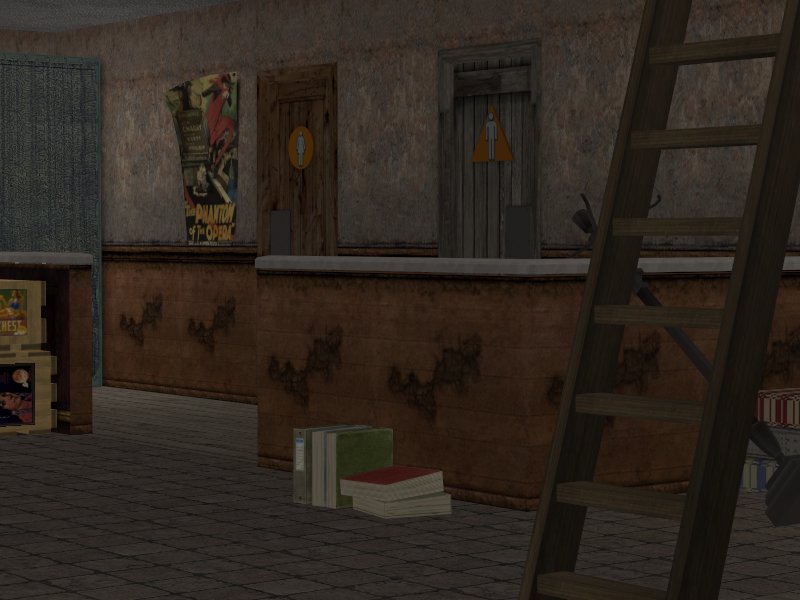 Those are the toilets... I don't think you want to go in there - squatters can be pretty.... creative with their output. The photobooth I think still works - but not at the moment. Why? No electricity of course. 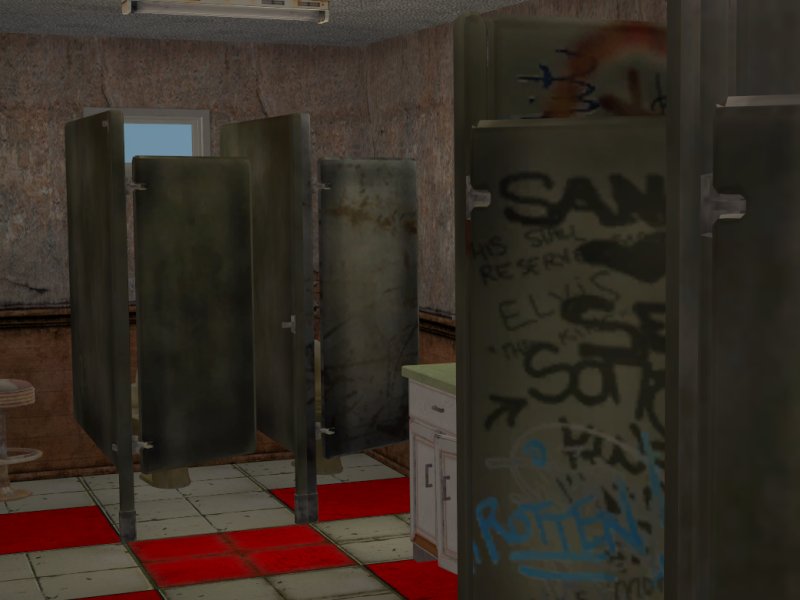 OK? I did warn you. If you must throw up, please do it outside - the toilets are full already. 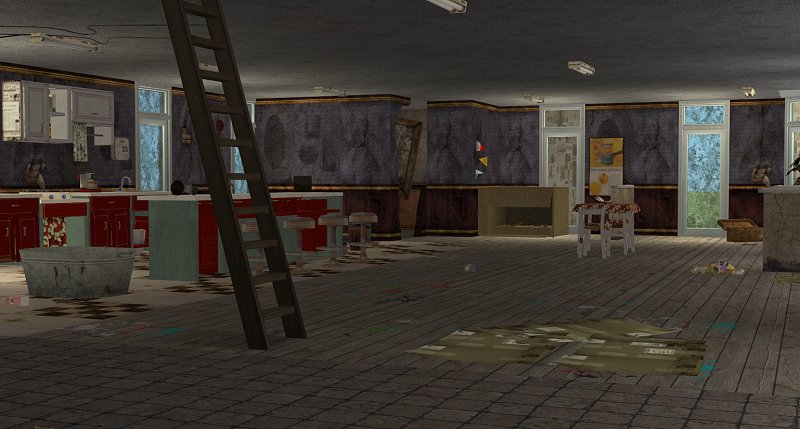 Moving right along!The other half of the diner was for the casual diners - there were small tables here, and booths along the walls. All those fittings have been sold by the previous owner when they went into receivership - what's left is bits and pieces that the squatter brought in. That includes the ladder. I don't think going onto the roof is a good idea. Lets just have a quick inspection of the booth area and employee room. 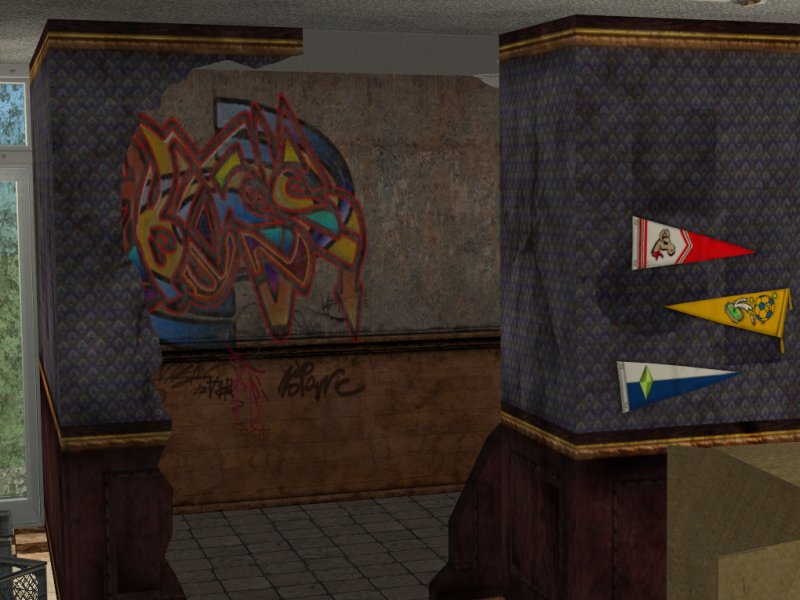 Yes. There used to be a door here. No. I have no idea why there isn't now - it looks like the door was removed rather violently. Thankfully they didn't get the supporting beams, so it should just require a carpenter/builder to repair it and replace the door. 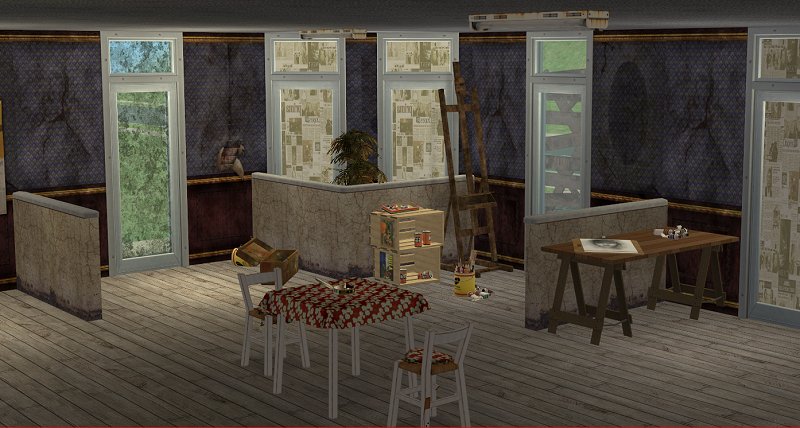 As you can see the booths have all been removed, but the squatter has re-purposed the areas. Now that's unusual - it looks like the squatter was of a creative bent. And looking at that pencil sketch, not too bad either. I wonder what became of her?  Yes - I had seen the squatter, she looked like a normal drugged up homeless young person. Not the sort of person we would want in our town. She wouldn't move on voluntarily, so the police encouraged her. No. No idea where she is now. I doubt that she will return. 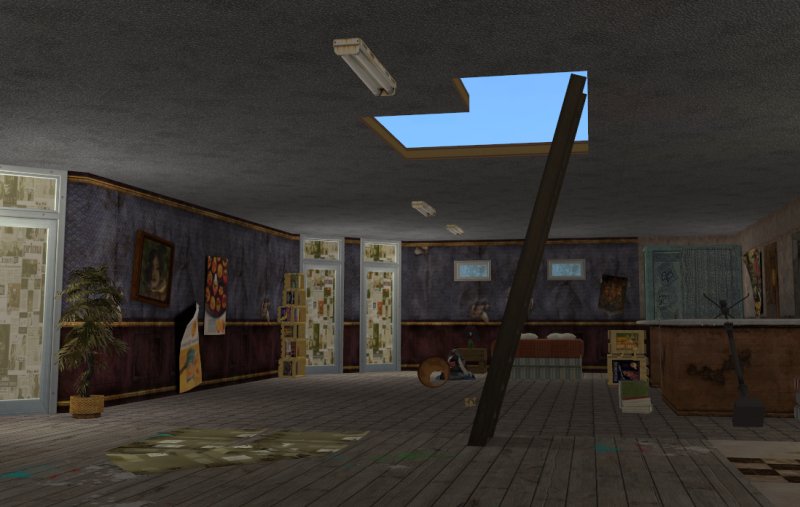 Now.The Roof. You sure? OK. <Shrugs> Be careful on the ladder, I'm not sure how well the rungs will hold. Me? No I'm not coming up - you're on your own!

What?! You'll need to shout louder, I can barely hear you. Look if you have any questions wait until you come down. I SAID "WAIT UNTIL YOU COME DOWN". Oh for crying out loud. I'll just come up. Yes it's always been like this. I'd be careful on the roof - those metal things look sharp - and I'm not sure the doctor has the tetanus injections in stock. 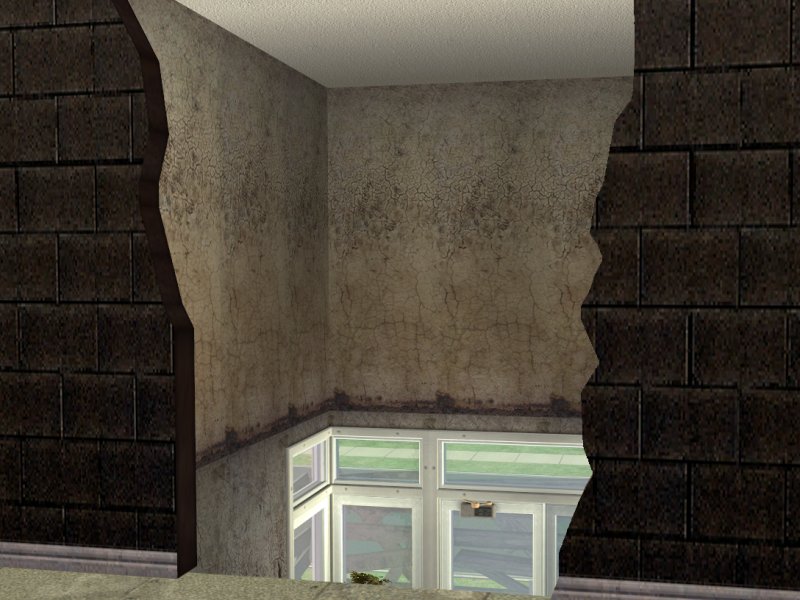 I have no idea what made that hole. I'm sure its repairable... I'd keep away from the edge if I was you. Lets go back down. Please? Please??!? 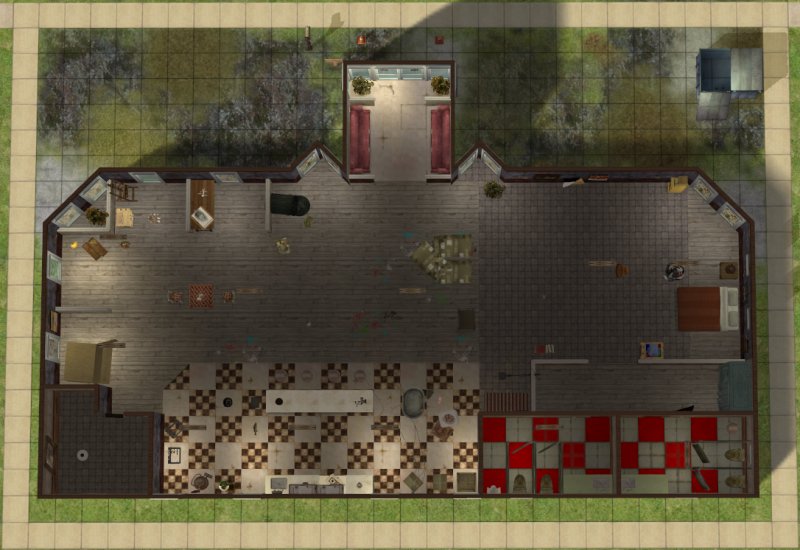 And here we have a birds-eye view. Thanks for your interest, you can meet me back at the real estate office on High Street, and we can talk about prices and so on. Remember at Mashuga Realty, we do you right!
Posted by Kiri at 11:01 PM