So Sapphira's twin joys hit the university campus, and the campus wasn't sure what had hit it.

Sapph's mild yearning for a girl - ended up in an unexpected situation. She hadn't spoken of it to Ben, and yet she was pregnant.

When Sapphira noticed that Riva had disappeared, she rushed out of the house, and chased after her.

"Come back Riva - we owe you so much! Please! We are forever in your debt."

That night was Ben and Sapphira's darkest time. Sapphira was inconsolable, and no matter how Ben tried to comfort her, she lay curled on the floor and refused to get up.

Things slowly improved for Sapphira, Ben, Janacek and Bozidar. Sapphira was still very tired, but she got enough help from the nanny to build up her strength to be able to stay awake for longer periods of time.

Ben led Sapphira to the sofa and wrapped his arms around her. "And now my love, there is a story you need to tell me. Your story before I met you."

Sapphira like so many others is a refugee. An orphan, she was used in her childhood to want and sorrow. When she came here, she was given a parcel of land, and a small amount of money. The land was the recompense for losing her family.

She heard him behind her. Zoe didn't turn around. "Where are the kids?"

Zoe couldn't sleep next to Jimmy. The sense of dread she felt overwhelmed her, and she sneaked out and back to her hard single bed, away from her family.

The children were pleased to have Zoe back. The food was better, the house was cleaner, they had clean clothes for school and they could find their toys again.

Dina was feeling worried. Mort was not getting hooked like he was supposed to. She'd woohoo-ed him, she'd kissed him senseless. But he was looking at her with suspicion and a growing contempt.

Matthew and Mark are lovely boys, and Jimmy spends all his time with them. He loves to watch them sleeping (as does B.H.I.S.) And they are perfectly behaved. Their relationships are good with each other and their father.

Jimmy and Zoe were now the proud parents of two gorgeous boys.  Matthew and Mark were generally well behaved.

Dina came over later that day, after taking away Mort.

It wasn't long before Jimmy got some visitors... and yup! even after 4 years, Stacey was still beating up on Prof. Zoe. 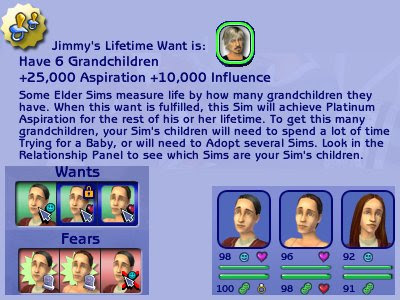 Jimmy found his Senior Term Paper "Political Science Majors: Why you should hate them" a little hard to write - after all Prof. Zoe was the Pol. Sci. professor for first year. 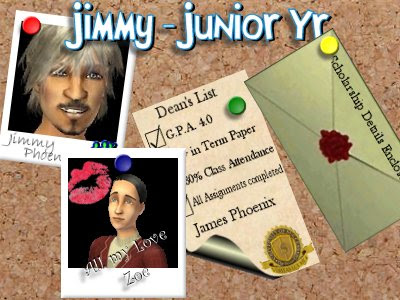 Jimmy Phoenix was doing well at University so far. A G.P.A. of 4.0, mostly through his own work. A Scholarship to pay for his tuition fees, and entered on the Dean's List again. 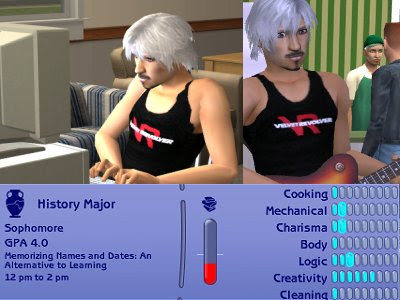 Jimmy may have been woo-hooing with Prof. Zoe - but he didn't get his GPA just because of that. Jimmy worked hard at his study, never getting anyone else to do it. When he wasn't working he was playing his guitar at the dorm. 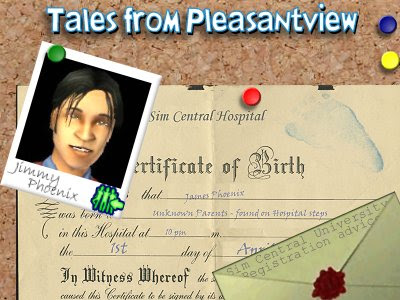 Jimmy Phoenix was born of Maxis parents, but to his dismay - he doesn't know who.
His birth certificate tells his sorry story - found in a box with his name written on the side - Jimmy Phoenix.