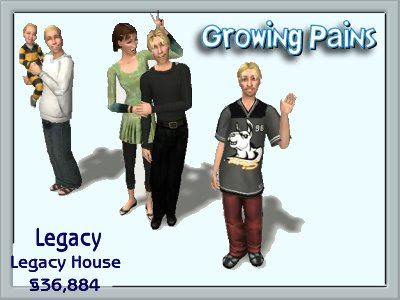 They aren't a rich family, because of the legal fees they had incurred getting their boys back after a bungle by the Department of Social Welfare.

Sapphira's has on-going problems with the energiser machine and thankfully has gotten over her anorexia.

Ben is a patient, loving husband who can boogie down with the best of them.

Jan and Boz, the twins  are shy, but loving and the whole family is very close.

Milan  loves Jan and Boz, and looks like he'll be the first one to be sociable. 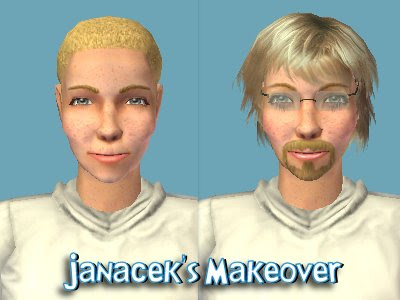 Jan didn't have the same need to emulate his father. So when he went and got his new look, he got a different look.

Sapph was surprised and a little dismayed at how much Jan looks like his maternal grandmother. Ben thinks he is a fine handsome boy.

It wasn't long before it turned out that the reason why Jan was squinting is because he was short-sighted. A new pair of fashionable glasses improved his eyesight, and hid his beautiful eyes. Like his maternal Grandfather - Jan is able to grow a good beard.

Sapph was quietly hoping that hiding his good looks behind the glasses, would slow down that part of his development.

Ben couldn't understand Sapph's prejudice against the Jan getting a girlfriend. 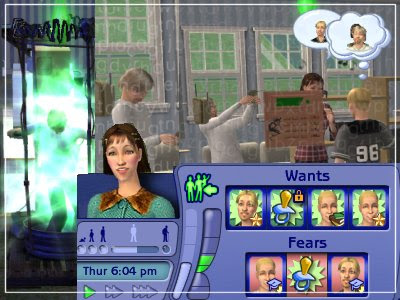 Jan tried out the energiser machine - but couldn't understand what the big deal with it was. As he said to his dad " I can understand that it helps keep your energy up... but so does coffee - and it tastes better!"

Ben was happy he had at least one member of the family that he didn't have to worry about with the energiser machine.

"I can see him becoming like my mother, Ben." fretted Sapph.

"Is that a bad thing?" Ben replied.

"Yes. very bad." Sapph did not explain - and Ben decided it was time to talk to Riva and find out about Sapph's parents for himself. 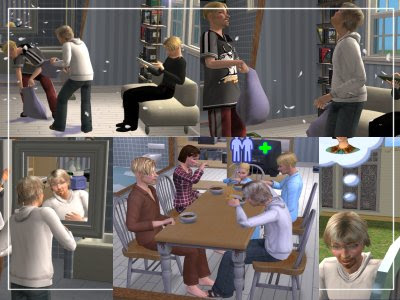 In the meantime, Jan and Boz were very close and as usual - their Saturday morning practice of mucking around with their dad and going off to the football was maintained.

But Jan was changing. He spent more time looking at himself in the mirror, and thinking of girls.

Family time around the table got more strained as he developed more. Sapph seemed to find fault with everything Jan did.

"What's mum's problem?" thought Jan as he went to school. School was a relief from the strain at home.

Ben took Sapph aside. "Sapph - you need to ease up on Jan - it's not fair on him. Can't you see how confused he's getting - he never seems to be able to please you."

"I'm sorry Ben. I'm trying. But there's so much that is happening to him, that I don't like." 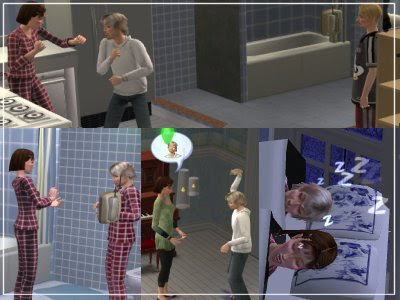 Sapph made an effort in the following days, to give Jan more attention and to quit finding fault in him.

She played Red Hands with him.... and Boz felt left out.

She danced with him.

She only lectured him the once about hogging the bathroom.

"But Muu-uum - I need to trim my beard!"
"Clean up after yourself Jan - the rest of us don't need to be swimming in facial hair. Why don't you trim your beard outside? Then the birds can use the hair for their nests."

But Jan was not immune to nightmares either, and even as a teen felt the need to climb into bed with his parents afterwards. His father, woke him up - as a child he might have been carried - but as a teen - he could carry himself! 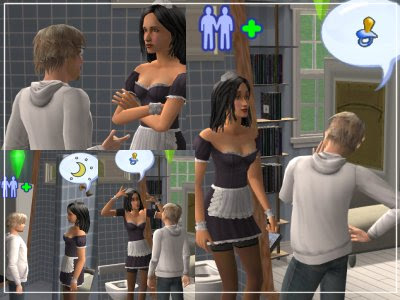 The other development that Sapph was not sure of was the burgeoning relationship between Jan and their maid.

As soon as Jan got home, and noticed that the maid was still there, he'd follow her around asking her questions, and talking to her about any old thing.

"Do you have any time to yourself?" Jan asked her one day.
"Yeah - most evenings are mine." Kaylynn replied, "Why do you ask?"
"Just wondering. Does it bother you not getting out much?"
"Not really - it's not like I have a family of anything to spend time with."
"Aww that's really tough. I reckon you'd make a great mother. You've been a real help to mine."
"Me! A Mother!" Kaylynn was shocked. "That's something that's way in my future. I don't need to think about it now!"
Jan checked out Kaylynn's cleavage. "I'd sure like to be your baby."
Kaylynn blushed and wondered what he'd say next. She though Jan was a good boy, though she really didn't know what to do with his flirting. 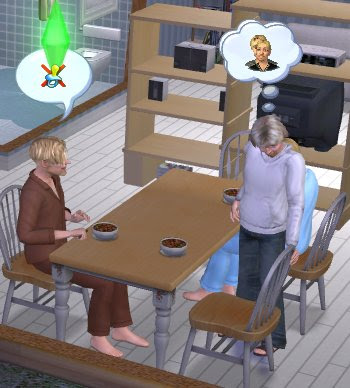 One night, Sapph kicked Ben, and shoved Ben until Ben gave in.

"OK Sapph. I'll talk to them both tomorrow."

And so Ben (with much prodding from Sapph) finally sat both his boys down and gave them the facts of life speech.

or "How not to get anyone (esp. the maid) pregnant."

Boz spent most of the time blushing profusely and looking at his feet.

Jan snickered - Boz and girls. "He'll NEVER talk to a girl without stammering!" he thought. "If I hadn't spotted that girly magazine he was reading, I would have thought he was gay."

Ben gave Jan a stern look - it was like he knew what was going on in Jan's mind. Jan blushed.

Later, Ben spoke to Sapph. "OK my love - they now know about the birds and the bees."
"Well lets hope they don't go trying out the whole garden."

Ben turned to look at Sapph - "We've brought our boys up better than that."
Sapph looked down "Yes - but my mother would woohoo anything moving. Those are strong genes to have to fight with, Ben."

Ben hugged Sapph. "That hurt you, didn't it Sapph?"
Sapph nodded, her eyes filling with tears. "Yes. it did."
Posted by Kiri at 9:07 PM